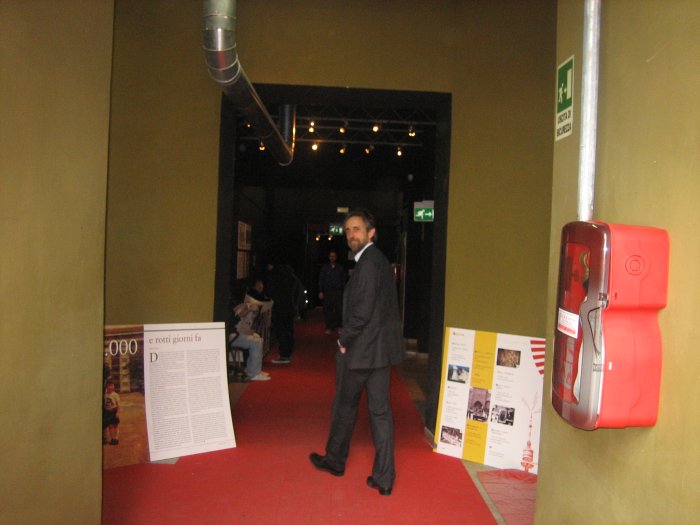 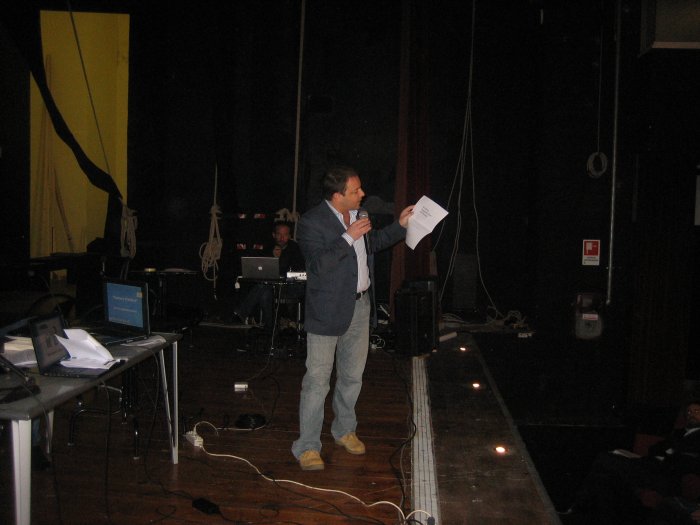 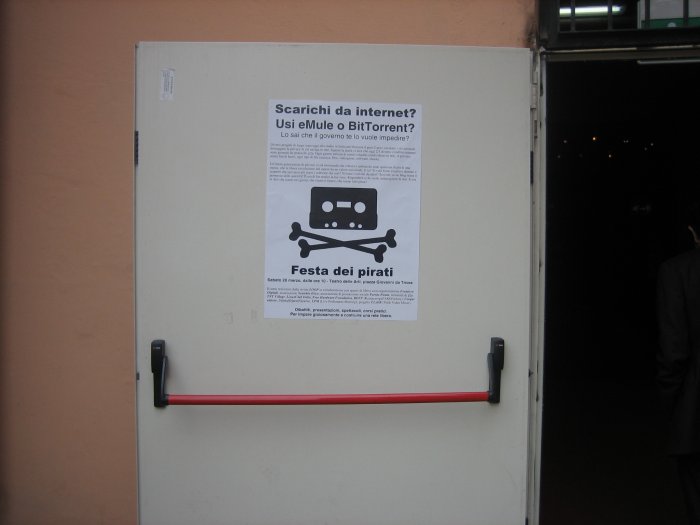 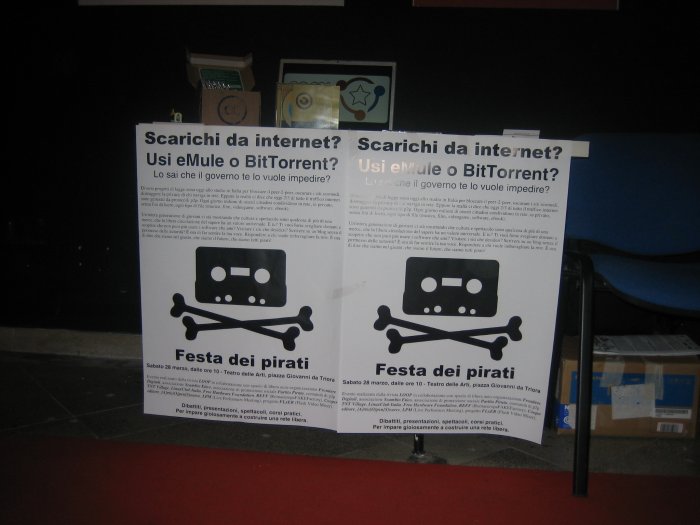 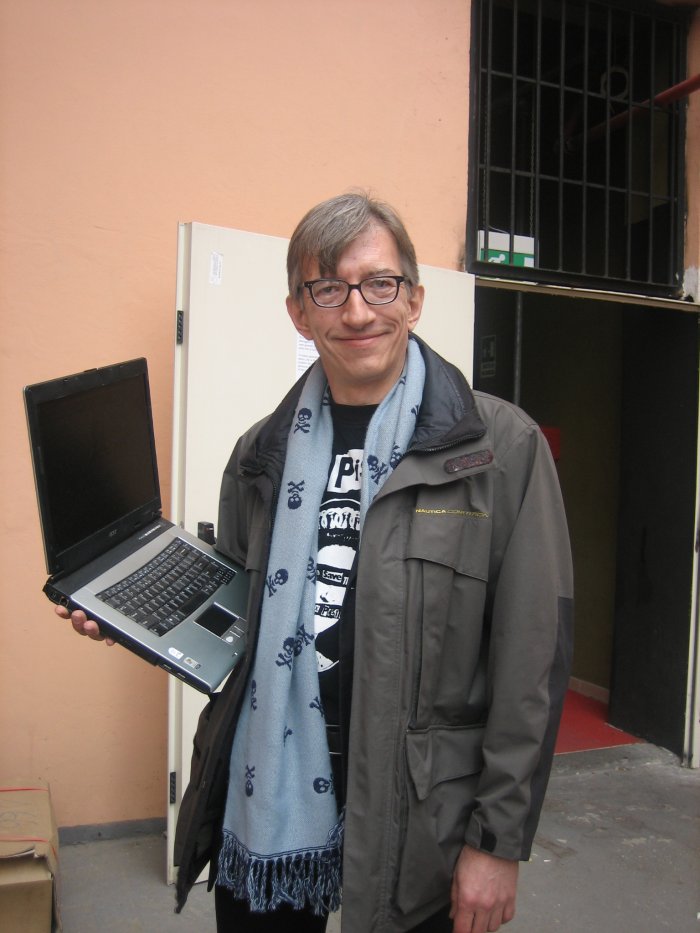 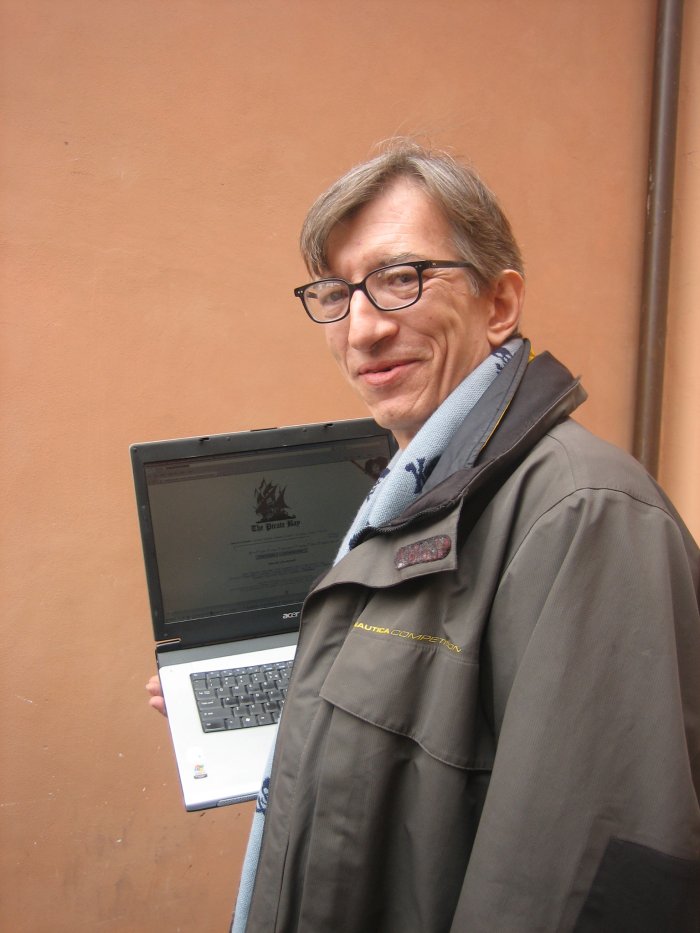 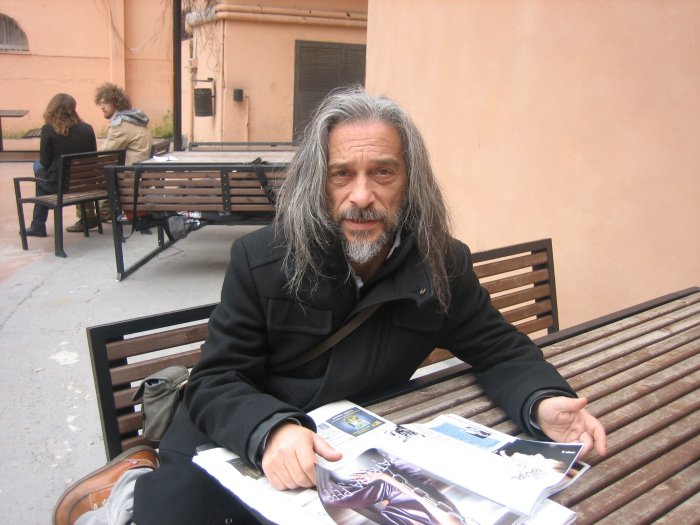 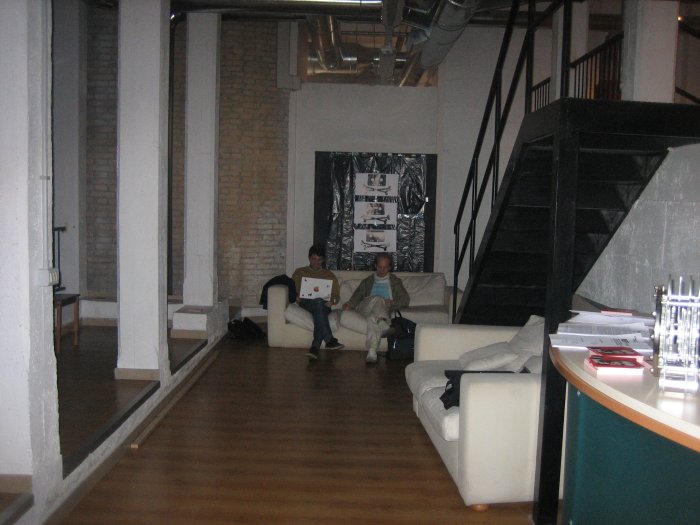 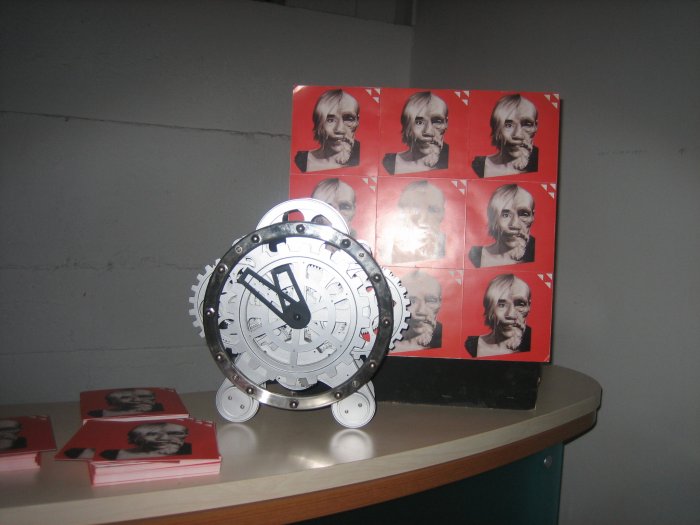 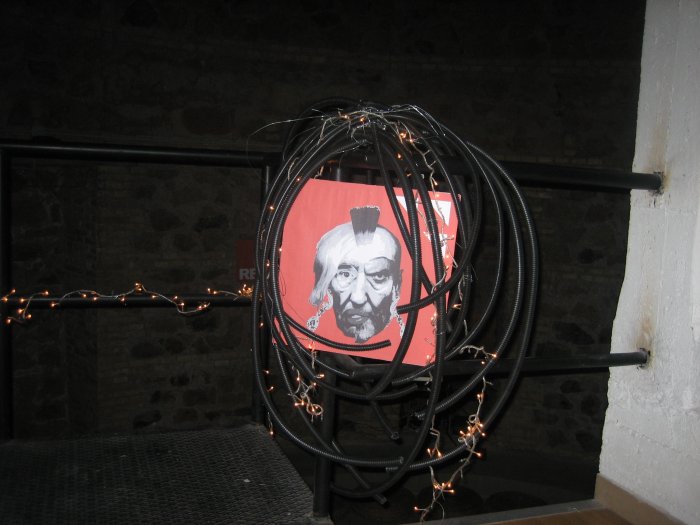 Thousands of Twitter accounts stopped and canceled. Hundreds of facebook profiles unveiled. Dozens and dozens of addresses of the jihadist propaganda listed and ready to be attacked. This is the second phase of #OpISIs, the Anonymous intervention to expose members of the galaxy of Islamic fundamentalism which is acting under the Cybercaliphate flags. END_OF_DOCUMENT_TOKEN_TO_BE_REPLACED

Let’s talk of copyright and about Bruce Perens. Ok?

Yes. I have been on both sides of the copyright issue. I worked at Pixar for 12 years and have had 19 years of full-time employment in the film industry. I am credited on Toy Story II and A Bug’s Life. I later became one of the founders of the Open Source movement in software, and left Pixar to pursue that. Today I help governments, companies, and lawyers understand Open Source. I’m also an Open Source software author, and am about to release a new content-management system for the Ruby on Rails rapid application development platform. I live in Berkeley, California, with my wife and 12-year-old son.

So, you can see that I’ve been on both sides of the copyright issue: I’ve made technology for feature films and have worked on the films themselves, and bought a home with my income from Pixar’s IPO. Then in my second career I made Open Source software and helped people worldwide to share the things they make, and companies and governments to understand this.

1) The juncture of conflicting interests frequently leads to a clash between copyright and other basic institutions (fundamental user rights) in our society, particularly the freedom of speech, privacy and Internet access. Is copyright, as we have known it for three centuries, an appropriate tool for the needs of creators and society in a digital environment as SOPA, Pipa and Scotus suppose?

The problem isn’t really whether copyright is appropriate, it is that there is presently no balance of the rights of the copyright holder versus the good of society. This came about because only the very large copyright holders have been represented in the drafting of copyright law, for at least a century. It is as if there had been elections in which only one party was allowed to vote. Of course the laws become progressively more extreme in such a situation. END_OF_DOCUMENT_TOKEN_TO_BE_REPLACED

Philippe Aigrain is co-founder of La Quadrature du Net a citizen group defending freedoms and fundamental rights in the digital environment. He has just published “Sharing: Culture and the Economy in the Internet Age”, Amsterdam University Press, http://www.sharing-thebook.net

Here are the questions:
1) The juncture of conflicting interests frequently leads to a clash between copyright and other basic institutions (fundamental user rights) in our society, particularly the freedom of speech, privacy and Internet access. Is copyright, as we have known it for three centuries, an appropriate tool for the needs of creators and society in a digital environment as SOPA, Pipa and Scotus suppose?

Copyright and the exclusive control on copies part of author rights are deeply inadapted to the digital environment. In the era of work on carriers, copyright was never meant to regulate the acts of the public (the reader for instance). In the digital environment, an exclusive control on copies could exist only by depriving two billion individuals (and soon more) from basic capabilities of copying and exchanging files. This impossibility of such a control has not yet been recognized by all, and thus we see an ever expanding series of increasingly harmful laws such as SOPA, PIPA or the ACTA treaty that the European Parliament will reject or ratify in the coming months. But other rights, such as the social rights of authors and other contributors to creation to be recognized and remunerated remain fully valid. It is just the way in which they can be implemented that is deeply modified. We must find ways of rewarding and financing creative activities that do not require controlling individual acts by the public.
END_OF_DOCUMENT_TOKEN_TO_BE_REPLACED Internet Democracy?
The role of the Internet in the revolts in the Maghreb region, and the dynamics at play between local and external influences?
Arturo Di Corinto ??
@ Fejs AC 2011

Since the times of Pericles, the forms of communication are constantly intertwined with the forms of democracy. It is perhaps for this reason that we have come to believe that any new medium, particularly with the penetration of modern mass communication, could herald a new dawn for our democracy. That was the case with the launch of telephone, radio, cinematography and finally television. But we know how that turned out: initially used by a bunch of pioneers, in some cases these media become a tool for Government propaganda and eventually large companies stepped in giving way to a typical merger and acquisition trend. The resulting conglomerates learned quickly how to control content and to communicate it to the masses to suit their own interests, while more and more the media space was being occupied by political figures just interested in gaining power, from Thailand to Italy to Mexico.
In recent years we witnessed the emergence of a novel and powerful communication tool – actually, broad a set of tools which we simply call the Internet. Once again, this new medium has deceived us in envisioning “a new era of Athenian democracy,” according to former USA vice-president Al Gore. Among its early theorists, the founders of the monthly Wired Magazine called up for “a democracy without professional intermediaries” based on a widespread use of distance technologies enabling an open and multidirectional communication. And in 1996 the Declaration of Independence of Cyberspace, drafted by John Perry Barlow (co-founder of the Electronic Frontier Foundation), sanctioned the vision of a totally “self-governing Internet” and the rebuttal to government of the Internet by any outside force, specifically the United States.

However, even in this case we could predict the outcome of this story. With the current professionalization of political communication, who has deep pockets is the winner on the Internet, can develop the best sites and pay viral agents to trigger the message chain that leads to the general consensus. Despite our initial hope that on the Internet every individual could communicate on equal terms, today this approach is far from the truth. END_OF_DOCUMENT_TOKEN_TO_BE_REPLACED Preface
Culturalazio.it, is the portal of the Department of Culture, Entertainment and Sports of the Lazio Region and was created with the aim of spreading the concept that culture is accessible to all. Inside the portal, citizens are not only seen as users of its contents but as its first producers.
The main idea of the Culturalazio.it portal is indeed that culture is a collective resource, in both economic and social terms. It is a “common heritage” and a regional portal on culture can be useful to promote knowledge on a territory’s cultural heritage, history, customs and traditions. END_OF_DOCUMENT_TOKEN_TO_BE_REPLACED

Free software as a Commons
by Arturo Di Corinto

“Thanks to its characteristics, free, open source software, is a distributed property that is capable of evolving into a Public Good.”

Its “open” and modular language, which is freely accessible and created thanks to the collaboration of many in different stages, allowing it to be perfected and modified, make the free software a “relational good” that, thanks to its accessibility, non-exclusivity and lack of competitiveness presents all the characteristics of a common resource: something which everyone can make use of, even if they have not participated directly in its creation.
The free software as an “environment for interaction”, presents itself as a meeting place for scientific research, social cooperation and innovation. Thanks to its “openness”, the free software is capable of “evolving” as an incubator for ideas and relations, which are the abstract constituents of highly evolved technological products. END_OF_DOCUMENT_TOKEN_TO_BE_REPLACED

Fabio Paris Art Gallery is proud to announce the second solo exhibition by
the Austrian artist duo UBERMORGEN.COM, presenting the world preview of the
project “Superenhanced”, which is dedicated to the pressing issue of
torture. Though torture is banned almost everywhere, it has re-emerged
under a new set of names with the neutral, tidy, functional language of
marketing and branding. http://ipnic.org/superenhanced
END_OF_DOCUMENT_TOKEN_TO_BE_REPLACED >Who is Mr. Bruce Perens?
I’m father of a 7-year-old boy, a husband, and after those come all of these technical things. I’m probably best known as the author of the Open Source definition, the manifesto of Open Source software and the rules for its licensing. I’m vice president of Sourcelabs, a venture-funded startup company that services Open Source. But I spend half of my work time being an Open Source leader, and Sourcelabs can’t tell me what to do or say in that capacity. It must be that way for me to maintain my credibility. END_OF_DOCUMENT_TOKEN_TO_BE_REPLACED

Software is not a ordinary object but an instrument good at building other tools and instruments.
Software instructs computers in writing letters, calculating, drawing, and it’s also usefull for writing music, recording stories and ideas and projecting machines and environments, for recording climate changes or warning us of an earthquake.
Software is a peculiar language form through which people manage culture and knowledge accumulated over centuries and because of that it’s not a simple utensil. Software is a cognitive artifact and it incorporates intelligence and work, it transmits meanings and values, it brings with it the idea of its creator and of its user. The fact that its use is exclusive, limited in space and time, or vice versa that it might be modified, given, freely exchanged even behind geographical barriers, makes a remarkable difference.
If the language, la langue et la parole, is the “operating system” of the society, software is the language of scientific and technological innovation in the information society. Because of this it has to be free, that is freely usable, to favour the progress of all the society, of every society, because, otherwise we would be all less free.
Think if someone patented the language. A comic strip story of 1991, made by Zzywwuruth e Cicare’ and published in Italy by Editori del Grifo, is really prophetic over this terrible perspective. END_OF_DOCUMENT_TOKEN_TO_BE_REPLACED

Entering a leg in a tense ten-year debate, we can say that maybe the “hacker class” does not exist, but the hacker culture certainly yes. And with as much certainty we can say that it has profoundly shaped our society. Historically, the hacker culture has emerged in the creative use of information technologies and its origins can be traced in the dormitories of the Massachusetts Institute of Technology on horseback of the sixties, when a group of geeks used to play with electric trains decided that was more fun to play with computers and coined the term hackers, to denote those who made working better software, telephones and relay with a “hack”. Since then, the hacker culture has expressed itself as a playful relationship with machines, electric wires and computers. END_OF_DOCUMENT_TOKEN_TO_BE_REPLACED

Implementing a Digital Business Ecosystem vs. 0.2

The European economy is slowing. The rise of the euro is taking a toll on exports because the its appreciation has boosted the cost of European products and many Europeans think is better to buy from the dollar area.

In a scenario marked by a modest growth of the global economy (mainly for the higher price of oil) the strengthening of the euro cuts deeply into the competitiveness of European companies. Especially the IT sector is exposed to the risk of new monopolies, consolidation and the ultimate colonization of European IT firms by large enterprises, especially from Usa and Japan.
END_OF_DOCUMENT_TOKEN_TO_BE_REPLACED

“Small and medium-sized enterprises (SMEs) are the backbone of the European economy. Accounting for 99% of enterprises, Europe’s 19 million SMEs are the main source of new jobs and play a key role in enabling Europe to compete in world markets. Although they tend to get lumped together under the one label, in reality SMEs are highly diverse. Some are dynamic and flexible with an innate ability to innovate and respond to changing conditions. Others are traditional, based on family involvement and embedded in local business environments. Still others are start-ups, fragile organisations striving to exploit niche markets or technologies”.
IST 2003: The Opportunities Ahead
END_OF_DOCUMENT_TOKEN_TO_BE_REPLACED